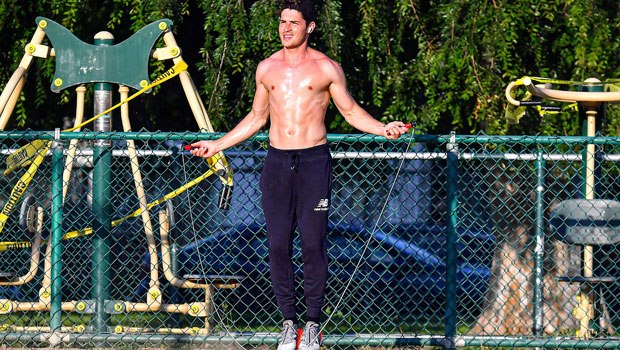 Gregg Sulkin is working on his quarantine fitness! The actor was spotted sweating it out shirtless as he worked on his defined arms and chiseled torso.

Gregg Sulkin, 27, is in shape! The British actor was sweating it out as he did a variety of exercises outdoors in Los Angeles on Wednesday, May 20. Gregg showed off his insanely toned abs as he opted to go shirtless at a local park, including a jump rope routine, sit-ups, and push-ups! Clearly, his exercise is paying off, as his arm muscles looked totally jacked alongside his perfectly chiseled torso. The former Wizards of Waverly Place star was sporting a golden tan as he soaked up the balmy Los Angeles weather. 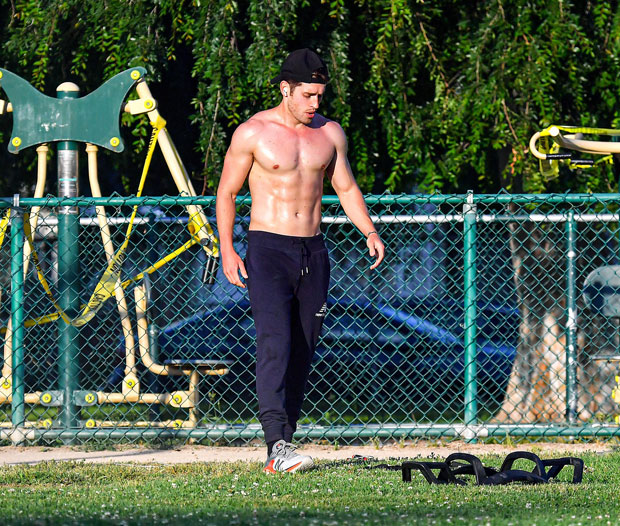 While Gregg was socially distancing during the one-hour sweat session, an adorable dog moseyed up to him to say hello! The gray-furred pup got a little hello from the London native, who is known to be a pet lover himself: the actor regularly posts photos of his pets, including his cats and dogs. Last year, however, Gregg sadly had to give up his Mexico rescue pup Bentley after discovering he was allergic. “This was one of the hardest decisions I have ever had to make in my life,” he wrote at the time. “Although it was heartbreaking for me to let him go, at least I have peace of mind knowing that he is now in a wonderful home, healthier than ever, and in fact, has been reunited with his brother (who was also rescued). I will miss you little man,” he added.

When it comes to quarantine, the Runaways star has been spending plenty of time working out! “These days are definitely unique and can definitely be long, but just want to encourage you all to keep physically active & mentally sharp,” he captioned a workout video shared to his Instagram on April 29, including the hashtag #GetUpGetOutGetHealthy.

“We will get through this and when we do, we will be back stronger, sharper & hopefully more in tune with ourselves than ever before, he went on, reminding his 4.8 million followers to tag a friend and “encourage [them] to be healthy.”

He once again opted to workout shirtless in another video shared on April 3, as he listened to Summer Walker‘s brooding track “Girls Need Love.” Rocking a pair of gray sweats, Gregg was breaking a sweat as he did various lunges to exercise his leg muscles.